We went to Back Beach to find a restaurant to make a place to stay, convenient for bathing while watching the sea and rai. The weather in Vung Tau today is bright and sunny, and the wind blows gently to cool people’s hearts.

Traveling to Vung Tau after a friend’s suggestion

The weather in this season is like a pan of fire pouring down to the ground, the air is hot and choked by the Lao winds that hit your face. My friend said: “Let’s go to Vung Tau”. “So surprise. Okay”. So I prepared my luggage, set off to explore Vung Tau to be free to struggle and release my soul in the sea of ??the Southeast region, temporarily “escape” from the sun in the white sand countryside and Laos wind. 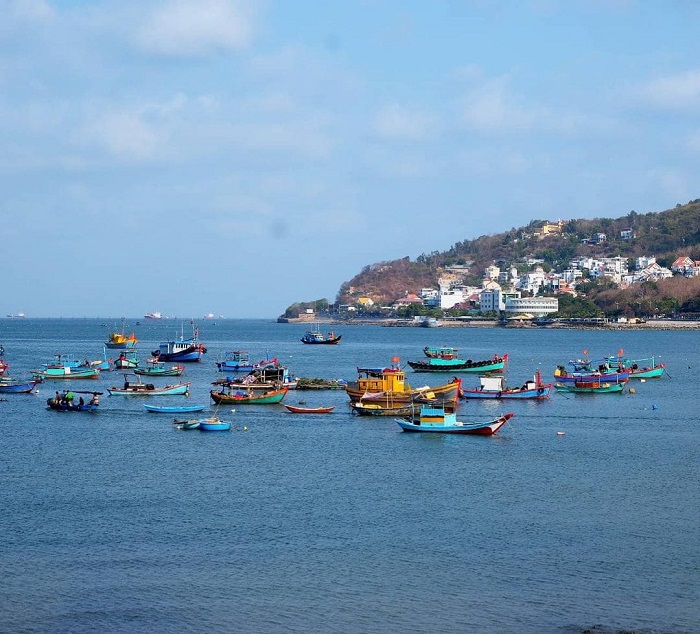 On the flight from Quang Binh to Ho Chi Minh City, the sky gradually covered with a pitch black night. I felt confused with thoughts, because it was the first time I had a long trip…

Two hours passed, the plane gradually landed at Tan Son Nhat airport. In front of me is a shimmering, fanciful street, sparkling like stars. The skyscrapers are revealed with bright electric lights. 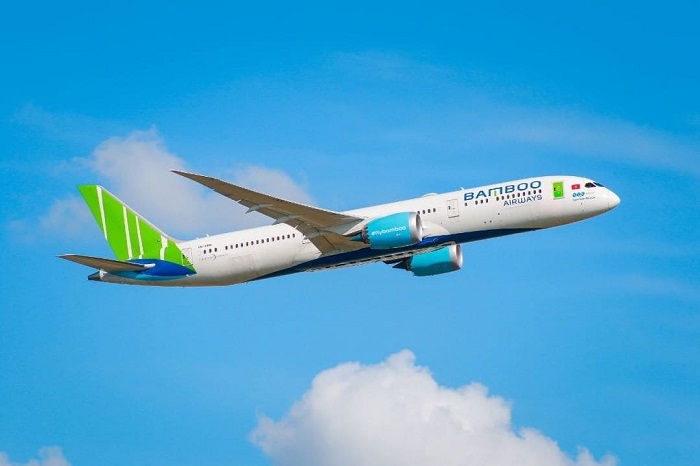 I walked down to the airport with a bit of a country man’s excitement on the street. The city night is beautiful, bustling but peaceful, bustling and orderly. My eyes were bewildered like a deer lost in the forest because everything appeared strange. At night, I could not sleep because I imagined where I would go tomorrow. 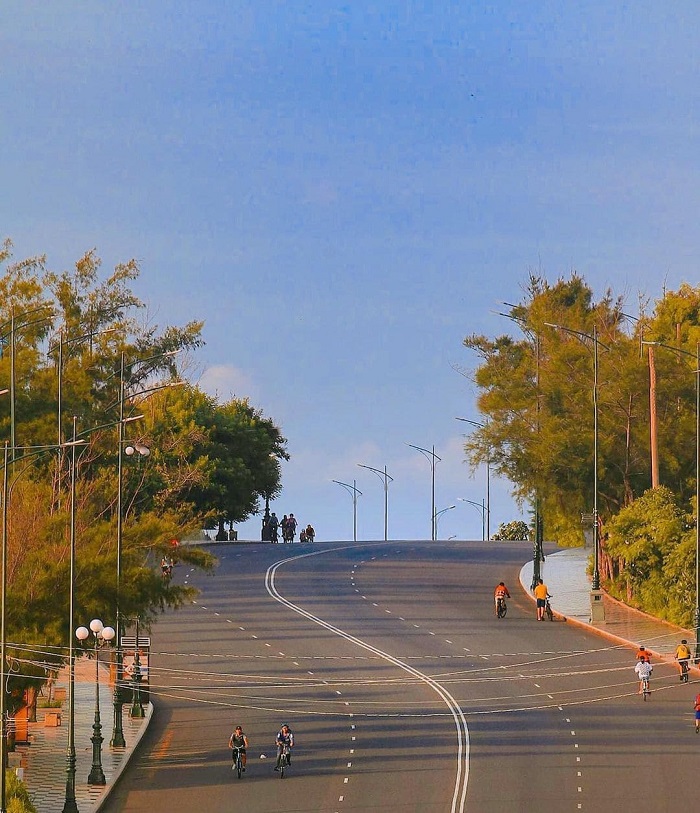 Peaceful scene in the coastal city of Vung Tau. Photo:72dalove

At 7 a.m., the sun was already peeking out from the trees on the side of the road. The morning sun is bright red, signaling a hot sunny day. I got on a bus to move from Saigon to Vung Tau . This distance is just over 100 km, traveling with a 2-hour route to arrive.

Vung Tau – a beautiful, developing young city of the Southeast

The passenger car ran smoothly on the flat asphalt road, the road was wide and clean. I passed the rows of yellow lily plants like ripe rice fields. I caught sight of fresh pink bougainvillea flowers fluttering in the gentle breeze, then rows of linden trees spread with a purple color of flowers, even clusters of gentle brown flowers clustered like twinkling stars.

On every street corner, the road I pass through are the colors of flowers and grass that soften people’s hearts, making the road to Vung Tau more shimmering, more poetic. 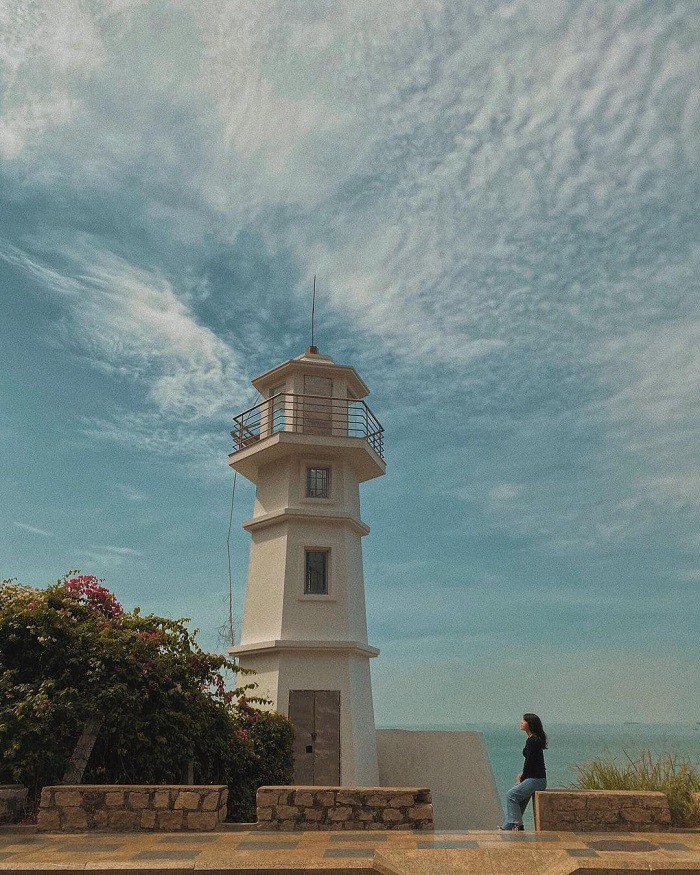 This is an attractive destination in the Southeast. Photo: luvanhiep_98

My friend said: “Let’s go to the center, there you can see the city freely” “OK”. Sitting on the back of a motorbike, I heard you introduce that Vung Tau has long been considered an attractive tourist destination, because of its natural beauty.

From here, one can see the East Sea both at sunrise and at sunset. No matter where you go during your trip to Vung Tau , visitors are also attracted by the charming scenery of this place. 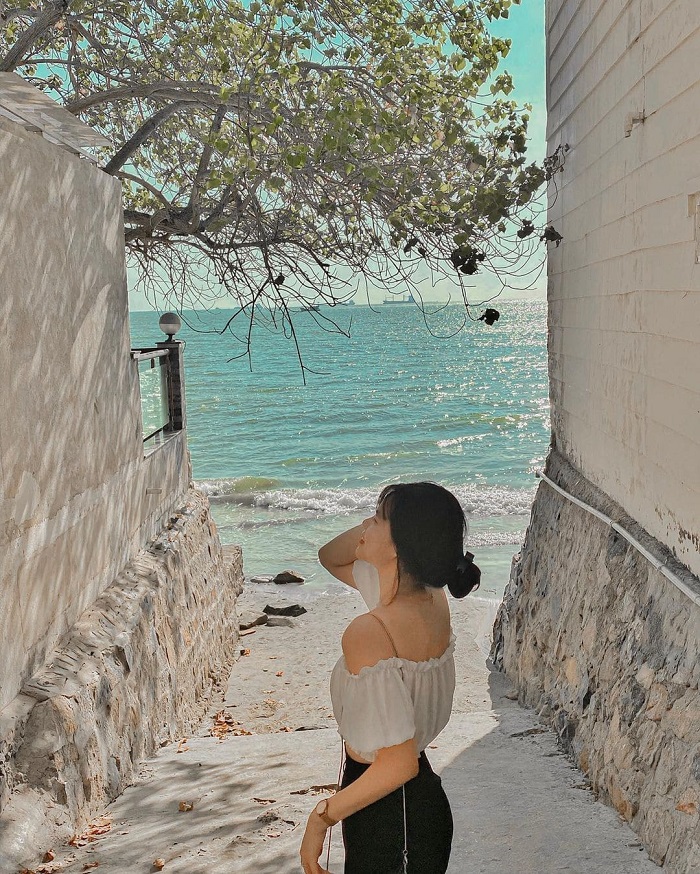 Vung Tau city is known as a first-class city, the most economically developed thanks to tourism. With a beautiful location with many famous beaches such as Front Beach, Back Beach, Bai Dau� this city offers many great experiences for visitors. In particular, the beauty of Vung Tau city is also reflected in many impressive bays. 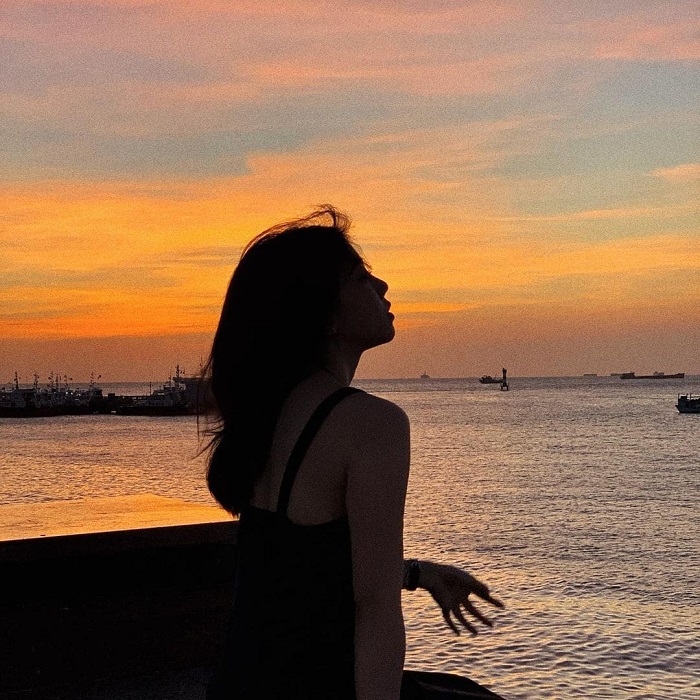 Sunrise or sunset on Vung Tau beach are both beautiful. Photo: ha.hongnguyen

Intoxicated chatting, we went into the city center from time to time. In front of my eyes are high-rise buildings that are well-balanced and beautifully designed. The shopping mall was packed with people. We went to visit Front Beach, the center of the city. This place has a lot of buildings and busy shopping areas, an ideal place to watch the sunset or go for a walk. 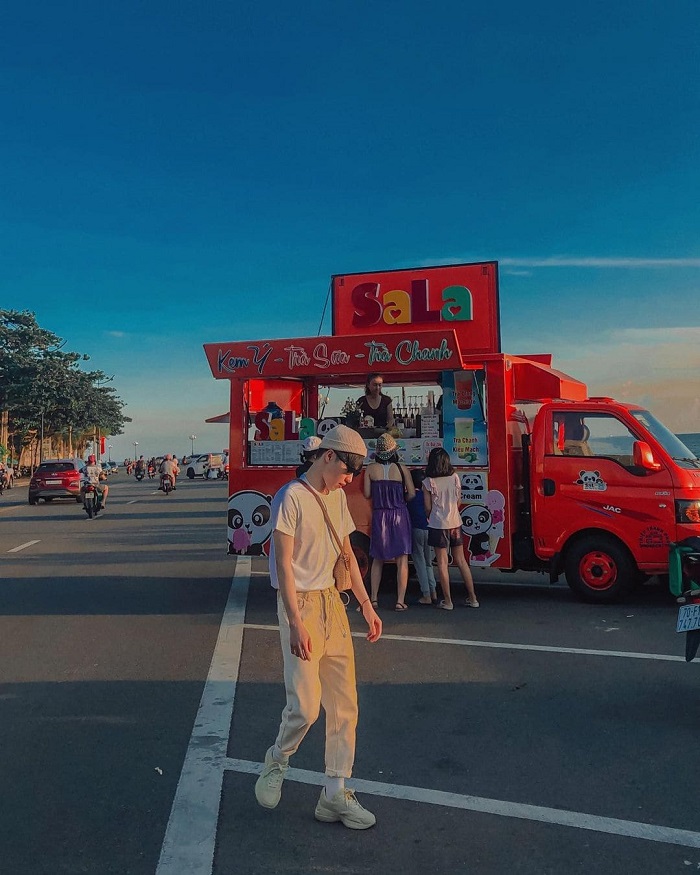 Pointing forward, you introduce to me, Front Beach is one of the beautiful beaches of Vung Tau city . I fell in love with the view, the city seemed to capture my soul and then almost got lost in the middle of the busy and bustling crowd. The motorbike slowly took us through the crowd so that I could enjoy the beautiful scenery and the blowing sea breezes. 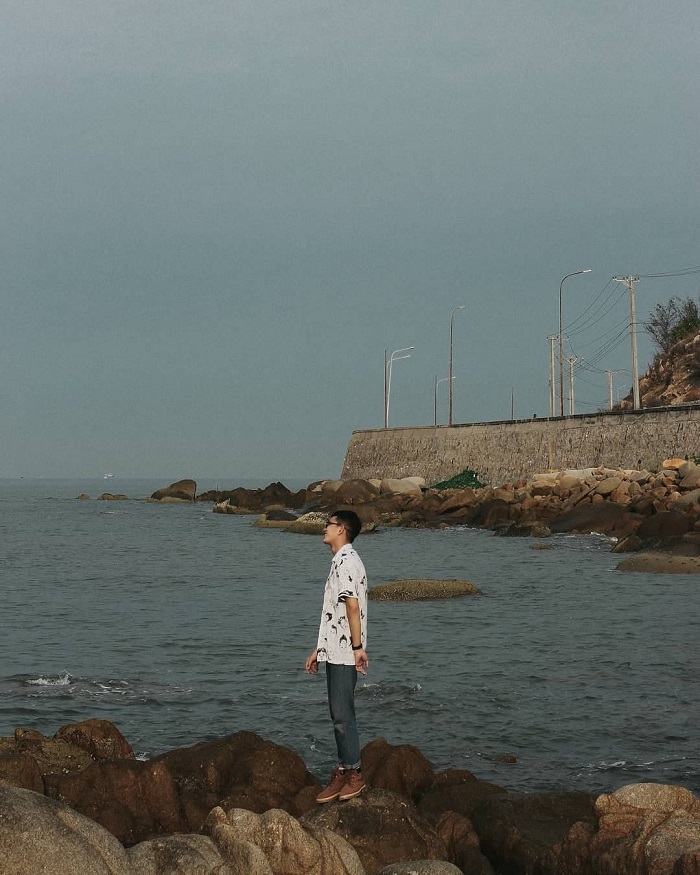 The sea is not too blue but the scenery is beautiful. Photo: teifeng

We went back to Ben Da fish market on Tran Phu street. It’s called a fish market, but people don’t just sell fish here. The sight that caught my eye was a variety of seafood. Come on, squid, red snapper, cobia, banyan… and all kinds of snails, clams, octopus, shrimp, etc., can’t count. All are stocked in cement tanks, plastic tanks with air pumps, as lively as standing under an aquarium. 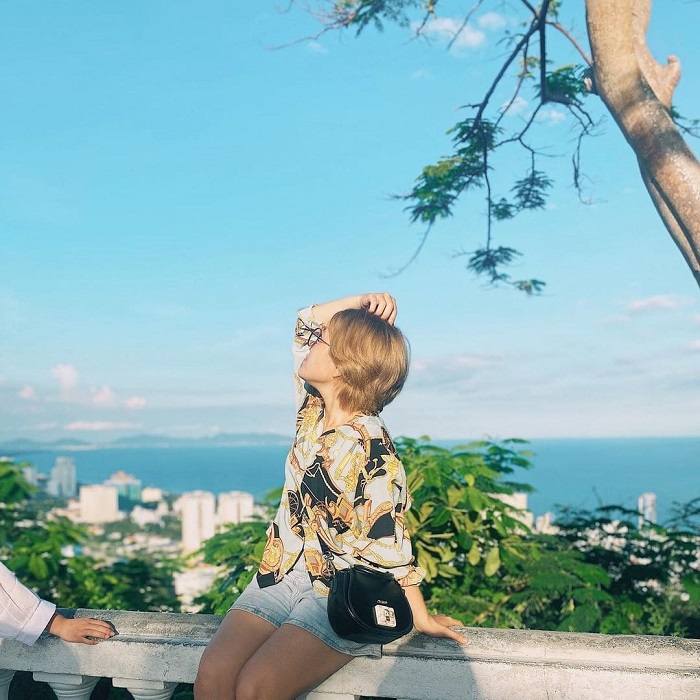 There are many beautiful corners for you to see the whole beauty of Vung Tau. Photo: lacasnie

I rolled my eyes at the bustling scene of buyers and sellers. The atmosphere seems lively and noisy but relatively orderly. Going around, my friend bought a bunch of fresh seafood, including squid, fish, snails… You laughed and said: “Drink this afternoon at Bai Sau. The seafood here is cheap and fresh. Going to Back Beach, I just swim and chat.”

We went to Back Beach to find a restaurant to rest – a place that is both convenient for swimming, sightseeing, and suitable for hiking. It’s sunny in Vung Tau today. However, Vung Tau sunshine is different from my hometown, sunny but not hot. The wind blew up and the waves hit the shore. 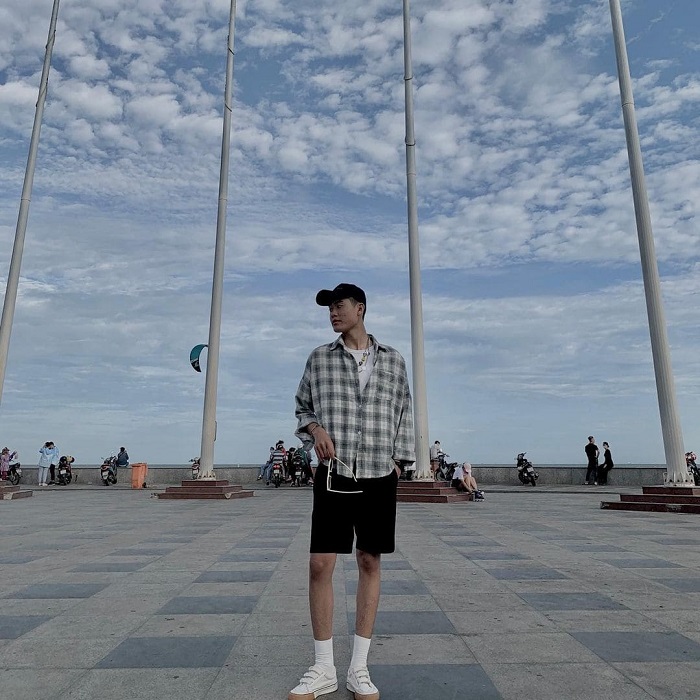 The beach city square is wide and beautiful. Photo:kkhoa

We released ourselves and released our souls into the sea. The endless waves of the sea like patting the body. Back beach with flat sand, smooth waves, light wind and fresh water, I immersed myself in the cool and poetic water.

Bathing as much as we like, we went ashore. My friend struggled to worry about “drinks and drinks”, I stretched out my legs on the chair listening to the breath of the wind, the whisper of the sea as if inviting, suddenly uttered a few verses:

Back Beach Vung Tau is a destination not to be missed. Photo:hoanghau1501

“Drunk in the whispering waves of theocean, bringing the high tide to thesea, the seagulls playing in the sun ofVung Tau suddenly feel familiar” 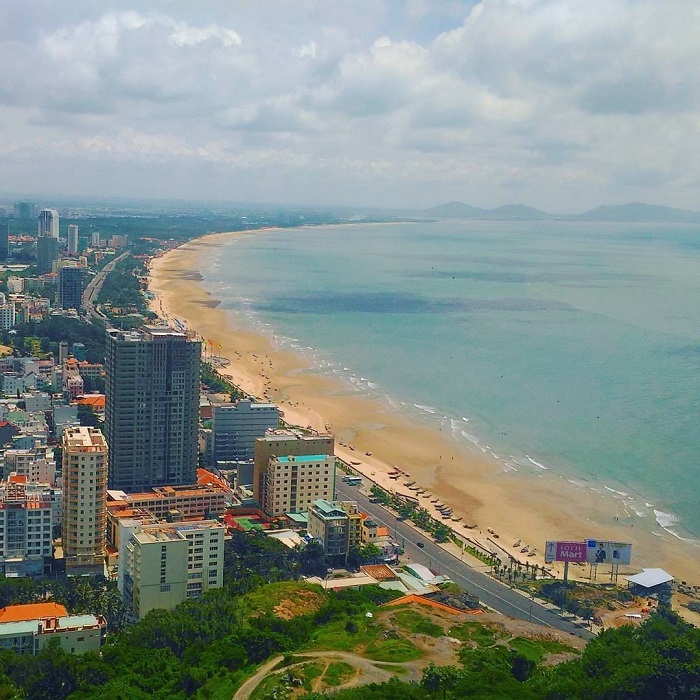 The beauty of Bai Sau seen from above. Photo:matt_abstrax

The scenery here is magical, Back Beach leaning against the flat sand dunes and casuarina groves whispering to the wind. Beneath the casuarina forest is a glimpse of communal houses in the Central Highlands built in a harmonious combination of traditional and modern features, full of amenities. 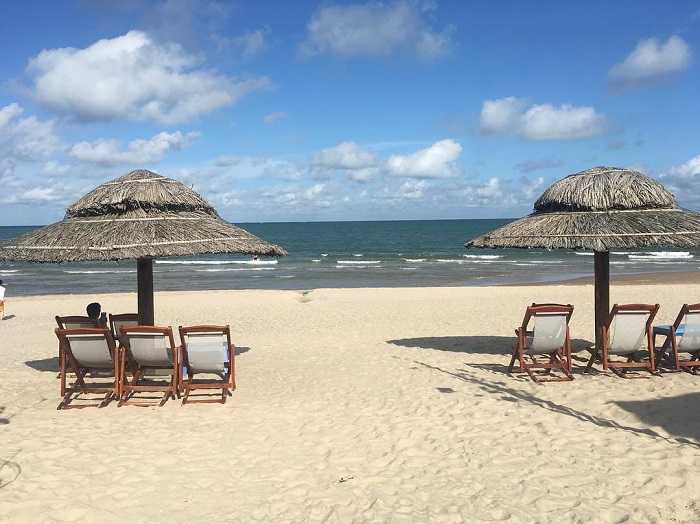 This beach has many advantages such as stable temperature, little difference, moderate waves and clear sea. Therefore, this is the most crowded beach in Vung Tau. Anyone who travels to Vung Tau also stops at this beach to swim and admire the scenery. 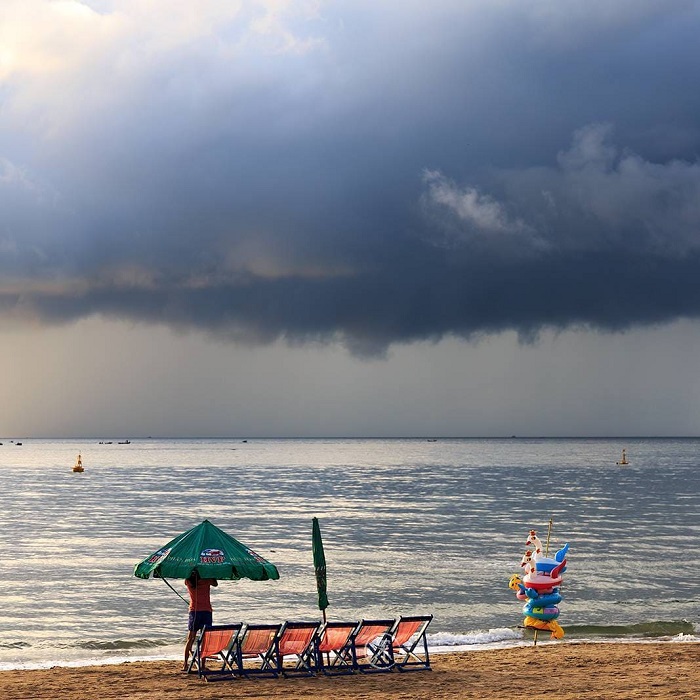 Far away, each group of people gathered more and more crowded. Laughter and voices of girls in gentle and lovely bathing suits. Sitting at the drinking table, admiring the aroma of squid, the fat of snails… at the tip of the tongue, I feel my soul lightheaded. The rustling sounds on the coconut branches seem to dispel the ups and downs of life, letting your soul be released into the immense sea and sky.

Other destinations in the coastal city

The sunset gradually fell, you took me again to Vung Tau night market . This is a market that gathers many extremely diverse seafood restaurants. The market is located near the intersection of Nguyen Bieu – Dao Duy Tu. Called the night market, but in fact the market opens from 3 pm and lasts until 1 am. Therefore, the market meets a variety of dining needs of tourists. 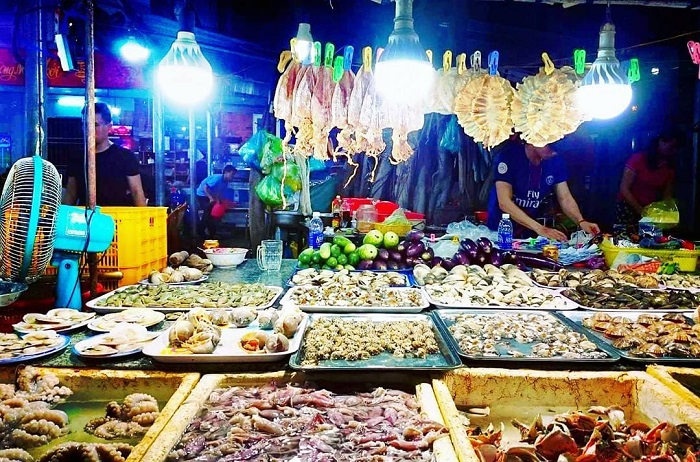 We entered a restaurant with the famous dish of Vung Tau, Korean style spicy stir-fried octopus salad. The octopus here is very fresh, seasoned to taste and the price is also very affordable.

While eating, introduce yourself like a connoisseur: �Octopus meat has many substances, useful for the development of the body such as iron, copper, zinc … and has iodine, which is very good for brain development. Octopus meat has almost no fat, is very beneficial for muscles, suitable for sports people and athletes. 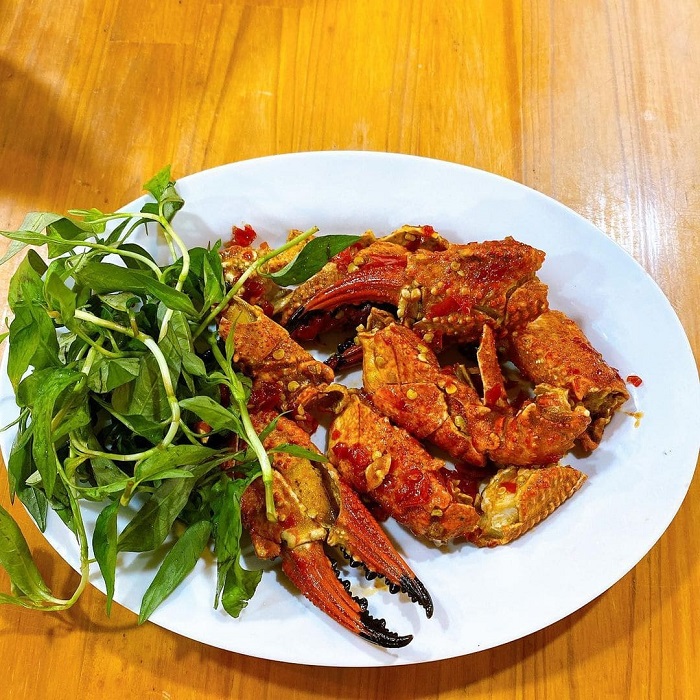 Then, looking at me, my friend said apologetically: “I’m busy tomorrow on business, otherwise I’ll take you to visit some places”. Then you tell me the places to check in when traveling to Vung Tau. These are the Statue of Christ, Hon Ba Island, White Rabbit Park, Pig Hill, Ho Coc – Ho Tram, Thich Ca Phat Dai … These are all beautiful and famous destinations in Vung Tau for many years. 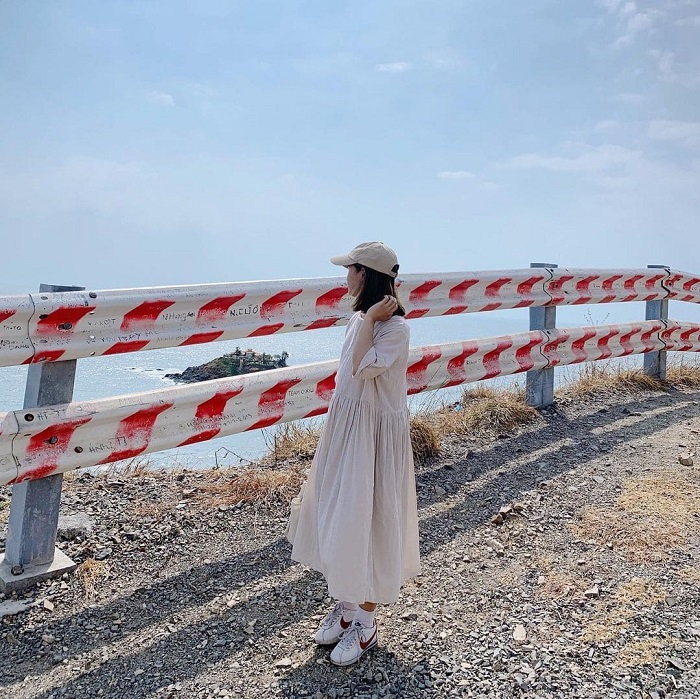 The most special is Ho May tourist area – one of the new and interesting tourist attractions that should be discovered when coming to Vung Tau. Just ride the cable car to enjoy the scenery, play games, swim in the lake and many other experiences such as playing horse games, continuous houses, trains, water parks, etc. 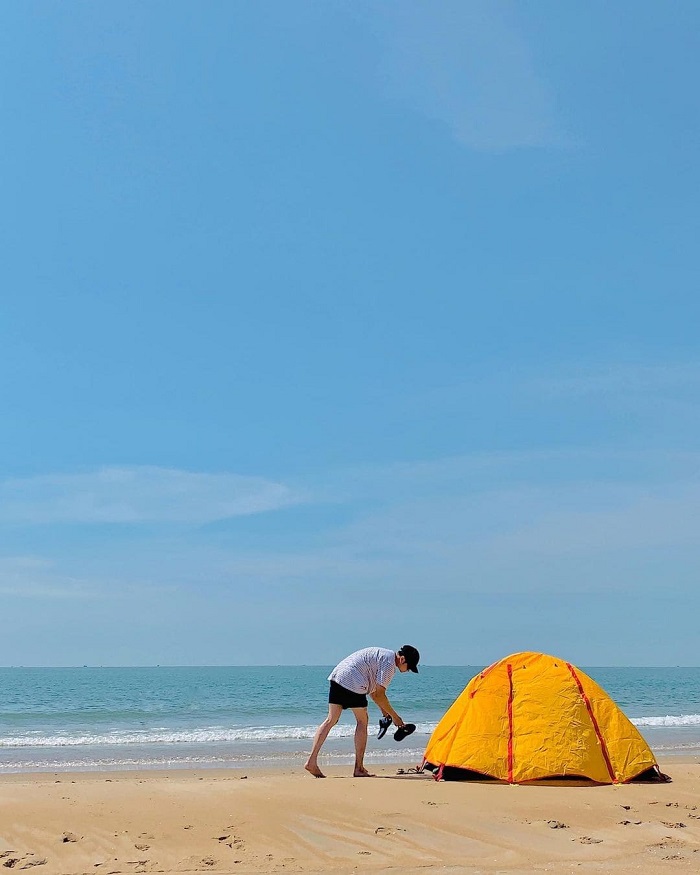 My friend also made an appointment, if I have the opportunity to travel to Vung Tau again, I should come to participate in some major festivals of the province such as the death anniversary of Saint Tran Hung Dao, Nghinh Ong Festival, etc. In my heart, I also hope to have a day to return to this beautiful coastal city, to explore more beautiful scenery of Vung Tau. 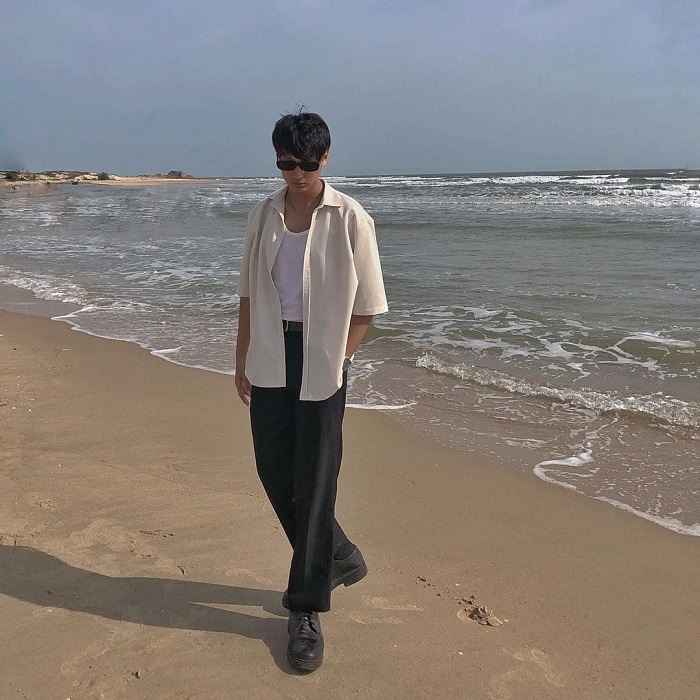 Ho Tram is a beautiful sea located beyond the remote suburbs. Photo: sosi_dlac

I got in the car to leave Vung Tau city and made an appointment to see you again one day not far away. Goodbye Vung Tau – a land with many attractive and interesting destinations. My heart was filled with many emotions about this place, from the strange feeling when I arrived, to the fluttering of the farewell. 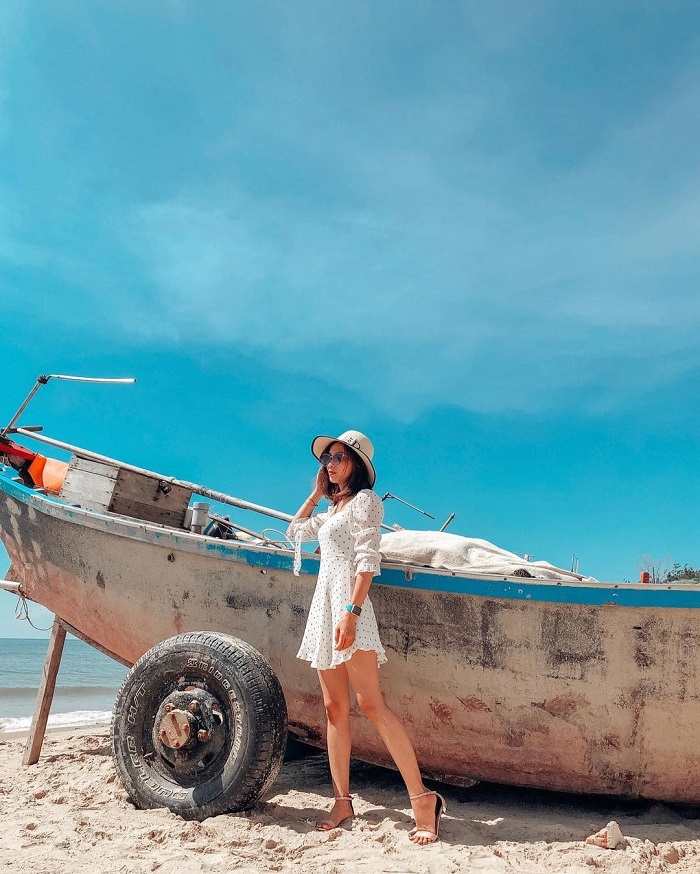 Vung Tau deserves to be an outstanding tourist city of the Southeast. Photo:chanadang

Vung Tau is a place not only to rest, relax, immerse in the immense sea but also feel the “green, clean, beautiful” of a quite developed coastal city of our country. Thanks to the favor of nature, the fresh climate, beautiful landscape combined with methodical planning have helped Vung Tau tourism thrive. 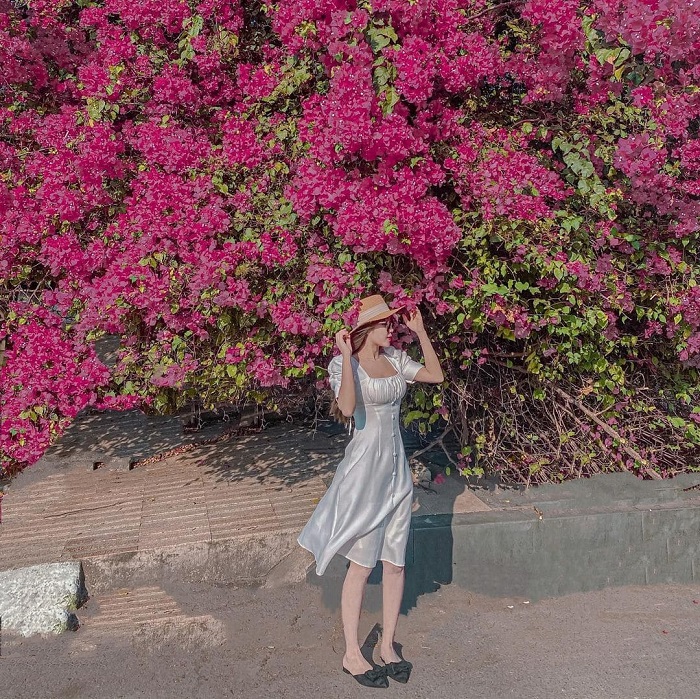 This spring, you must definitely travel to Vung Tau once for your delight. Photo: kunlaii

To me, this beautiful coastal city is a friendly, hospitable destination and a “Livable City” because of its healthy living environment. Hopefully in the future, the beauty and value of Vung Tau will be maintained and developed even stronger. For long-distance travelers like me to come once and remember forever!